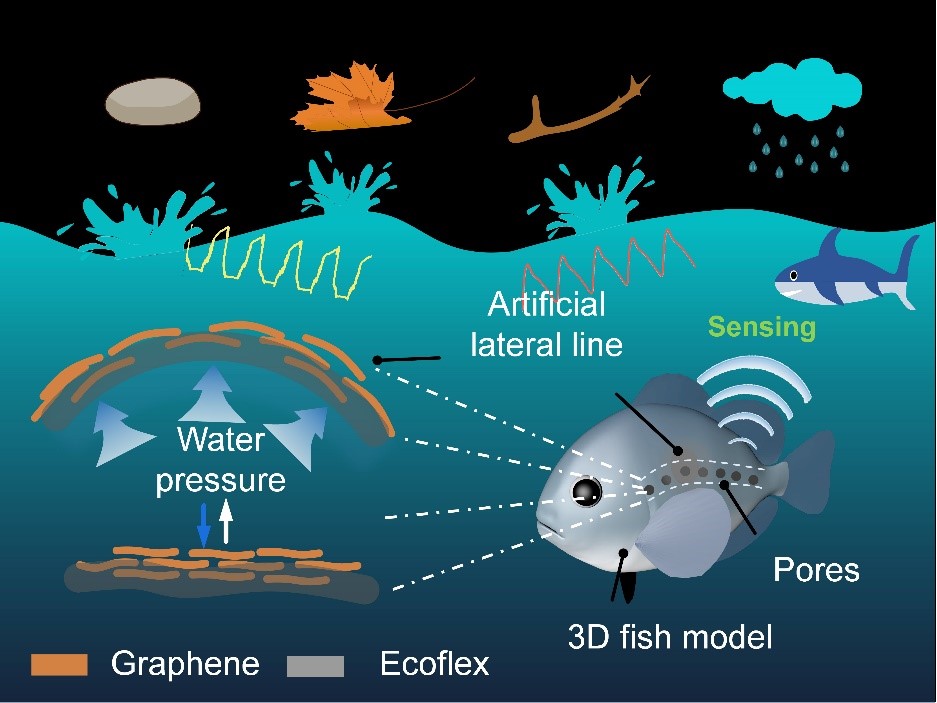 The Smart Polymer Materials group led by Prof. CHEN Tao at the Ningbo Institute of Materials Technology and Engineering (NIMTE) of Chinese Academy of Sciences (CAS), has developed a lateral-line-like underwater mechanical sensor (LUMS) which can actively detect the water depth with a wide range of 0.3-1.8 m and sensitively capture the mechanical stimuli from land and water. The study was published in Nano-Micro Letters.

With the development of various underwater tasks such as water environment monitoring and underwater biological tracking, flexible sensors with functions such as detecting underwater depth and perceiving liquid level fluctuations have been widely studied. The design of flexible, imperceptible and stable underwater sensors in one integrated system for broad water depth detection and sensitive vibration perception still remains challenging.

Fish possess special skin receptors, i.e. lateral line, distributed on both sides of the fish's abdomen and head, which can sensitively perceive changes of the surrounding water flow rate and water pressure.

Inspired by the structure and functions of the lateral line, scientists at NIMTE developed an underwater sensor based on the graphene/Ecoflex Janus film, which was fabricated at the water/air interface.

When the LUMS is placed underwater, the self-Janus film deforms under the collaborative drive of the water pressure and the air pressure in the air chamber. This deformation causes a change in the resistance of the sensor, inducing the corresponding electrical signal change in real time to realize stable underwater depth detection.

Thanks to the excellent adaptive and morphable features of the graphene-based layer, the range of detection depth can be controlled through the size adjustion of the graphene/Ecoflex Janus film on LUMS, achieving a wide underwater depth range of 0.3-1.8 m.

In addition to the tiny undewater vibration (e.g. wind blowing, raining), the developed mutifunctional LUMS can capture the mechanical stimuli from land, such as knocking, stomping, etc. sensitively in real time.

This study on the lateral-line-inspired underwater sensor may shed light on the further research of high？efficiency underwater detection and vibration perception.